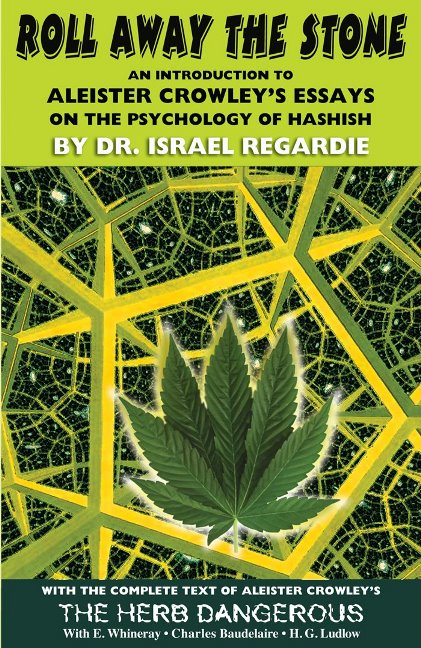 Israel Regardie is one of the most important figures in the twentieth century development of what many have termed the Western esoteric tradition, which normally refers to the synthesis accomplished by MacGregor Mathers within the Hermetic Order of the Golden Dawn during the 1890s. Among those who proceeded to explore and build among this tradition are Israel Regardie and Aleister Crowley. In this 1968 classic, Regardie prefaces and expands upon Crowley s discovery that drugs initiate and stimulate the mystical state, providing the reader with a backgroud to Crowley s The Herb Dangerous. The English poet and mystic, Aleister Crowley had produced a series of ten large magazine-like volumes with board covers entitled The Equinox. The intention was to publish a separate issue every Spring and Autumn for five years making ten numbers in all. Openly published in them were his superbly written essays on the psychology of hashish. These were his earliest overt admissions to the occasional use of hashish as a psychedelic agent. The first four issues of this periodical contained an important serial entitled The Herb Dangerous. The opening essay, The Pharmacy of Hashish, by an English chemist, E. Whineray, was a clinical and chemical analysis of Cannabis Indica, whose first cousin is marijuana, Cannabis Sattiva. The second essay entitled The Psychology of Hashish was written by Oliver Haddo, one of the innumerable pseudonyms used by Aleister Crowley. It was succeeded in the third issue by The Poem of Hashish, written by Charles Baudelaire, and translated beautifully from the French by Crowley himself. The final installment of the serial consisted of selections from a fantastic piece of writing by H. G. Ludlow entitled The Hashish Eater. Easily a rival to de Quincy s Confessions of an Opium Eater, Ludlow s book was published by Harpers (New York, 1857). These four essays comprise the main body of this text.

EARLY YEARS Francis Israel Regardie was born in 1907 to an Orthodox Jewish family in the East End of London, an impoverished area that twenty years previously had been the stalking ground of Jack the Ripper. When he was still a teenager, he emigrated along with his family to the United States, settling in Washington, D.C. Regardie was early on attracted to the writings of Madame Blavatsky and her Theosophical Society, in addition to Qabalistic and Rosicrucian studies. While living in D.C., at the age of 20, Regardie became an Initiate of a Rosicrucian group there. RELATIONSHIP WITH ALEISTER CROWLEY Shortly after, Regardie came across a book of Aleister Crowley’s and was immediately awestruck by the elder magician’s talent and evident genius. In 1928 He began a correspondence with Crowley, who was then living in Parib, and was eventually offered a job as Crowley’s personal secretary. Despite his association with, and admiration for, Aleister Crowley, Regardie never considered himself a Thelemite. It is telling that he joined an offshoot of the Golden Dawn in 1933, over thirty years after Crowley himself terminated his association with the order. In fact, Crowley was actively involved with the Ordo Tempi Orientis during the 1920s and later, yet it appears that Regardie either had no interest, or Crowley did not invite him to participate therein. GOLDEN DAWN Regardie’s resonance with the Golden Dawn derived in part from the intuitive knowledge that he demonstrated in his 1932 book, The Tree of Life. With the sponsorship of Dion Fortune, he joined the Stella Matutina in 1933 but quickly became disillusioned with its egotistical leadership and departed less than two years later after attaining the grade of Adeptus Minor. Three years after that, he published his landmark collection The Golden Dawn, making the “secret” rites and teachings of the on-again, off-again Order available to a wider public for the first time, and making possible today’s resurgence of interest in the Order. Several years later, Regardie and Crowley parted company after an acrimonious public clash of personalities. Regardie returned to the United States and studied chiropractic medicine in New York. He served in the Army during World War II, and afterward moved to Los Angeles to open a chiropractic clinic and also work as a Reichian therapist. He had studied psychology and psychiatry with several notable teachers and was a strong proponent of Jungian analysis all his life, as well as the more controversial work of Wilhelm Reich. Both writers are known among the 20th century’s most unique and controversial psychological theorists, whose writings straddled the border between science, religion and myth, and incorporated a strong element of sexuality. It is easy to see how this emphasis blended well with Regardie’s magical and esoteric studies.

Be the first to review “Roll Away The Stone” Cancel reply